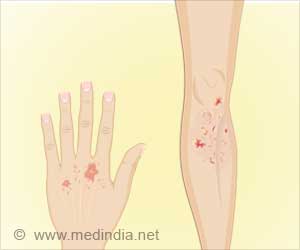 Eczema in African-Americans is more difficult to treat, finds a new study. The findings of this study are published in the journal of Annals of Allergy, Asthma and Immunology.

Those who suffer from atopic dermatitis (AD) – also known as eczema – know it can be an uphill battle to find the right treatment. Symptoms include severe itching, scaly rashes, extremely dry skin, and inflammation. And that battle can be more difficult for African Americans with the condition.

‘African Americans with atopic dermatitis (AD) or eczema have more inflammation than European Americans who have the same the condition.’

This is the first molecular study of the skin of African Americans with AD looking for differences that could explain variances in the severity of their condition and response to similar treatments.

“This may prove to be a valuable enhancement for treatment options for African Americans with the AD,” says allergist Donald Leung, MD, Ph.D., executive editor of Annals of Allergy, Asthma, and Immunology. “It will also reinforce the importance of racial diversity in clinical research studies for an effective treatment for AD.”

Pollen Exposure during Pregnancy May Increase Asthma Risk in Babies

Cases of Anaphylaxis from Tick Bite Meat Allergy on the Rise