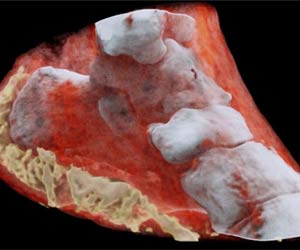 Gone are the days of black and white as the researchers have found the first-ever 3D color x-rays performed on humans with the help of CERN physics lab and Universities of Otago and Canterbury.

This new device can be a boon to the medical diagnostic field which helps the physicians to give a more accurate diagnosis to their patients. According to the reports, images can be differentiated between the bone, muscle, and cartilage very clearly.


The new device called “dubbed Medipix” is developed based on the old black and white x-ray technology which combines the particle tracking technology developed by CERN. It works like a camera where it detects and counts single sub-atomic particles as and when they collide with pixels when the shutter opens. This device gives you a high-resolution and high-contrast pictures.

This new technology can be a promising future for accurate diagnosis in the field of medical science.